GRAND OPENING OF THE BANSTEAD GIRLGUIDING DISTRICT HEADQUARTERS
5 JULY 2016
In Patsy’s speech at this event, she opened by saying that Rome was not built in a day – and neither are new guide headquarters buildings! Any of you who have been around a while will know that this has been a VERY long road, but the relief now that it is over is palpable. It is a fantastic space and the six units that meet there and the nursery which uses it by day are enjoying their bright new venue.
Kathleen, David Walliams’ mother was a Brownie leader in Nork for many years – it is probably her Guiding principles showing through when he does his amazing charity swims. She has been a supporter of the fund raising, and through her, so has David. So it was with huge excitement that we planned the opening by a major celebrity associated with the project. 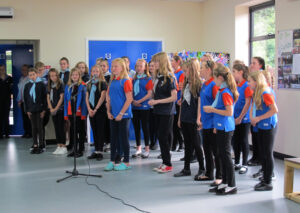 This did put some constraints on us though in terms of number of people – and particularly Rainbows, Brownies and Guides – who could be there. Lots were drawn, and there were some very disappointed girls. The great and the good were invited – particularly our local Councillors who have been very supportive in finding us some grant money.

First of all, the Rainbows and Brownies who had got the ‘golden ticket’ were treated to an audience with the man himself. They were invited to ask questions and they came up with some really good ones. He read an extract from his book Gangsta Granny too. The girls then left with a signed copy of The World’s Worst Children. At this point the Guides took over with a performance of Thank you for our Building set to the music of Thank you for the music, beautifully executed after only a couple of rehearsals under the direction of Lindy James, our DC. As a Britian’s Got Talent judge, David Walliams was very impressed!

Just before rushing off to his next engagement, our celebrity unveiled a plaque commemorating the event and giving thanks to all the many people who have helped us along the way. Patsy Wooldridge, who as DC bore the brunt of a lot of the work and worry associated with the project, then gave a short speech again saying there were far too many people to mention but it was certainly a case of many hands. 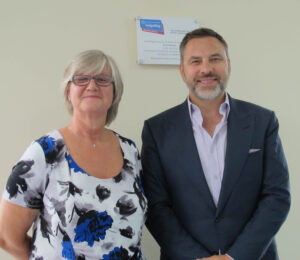 The formalities over, it was time for the refreshments and for all our guests to mingle – and for the organisers to feel relieved that it had all gone off so well.
Particular thanks must go to Gemma James, leader of 6th Banstead Guides, who was the event co-ordinator with a committee of Beverley Kent and Liz Collier, 4th Banstead Guides, Anne Bowdery, 2nd Banstead Brownies, Rebecca Mayall, 5th Banstead Brownies, and Laura Simpson, also 6th Banstead Guides. Another particular thank you to Jane Cramp, Banstead and Kingswood Rainbows, who made a fantastic job of the catering. When Patsy moved away to Dorset, the project was midway and someone had to pick it up and finish it. Lindy James has done some hard yards in the last few months getting to the finish line and we thank her too.
So a fantastic effort by many people – just what Girlguiding is all about.